In today’s world, in spite of technology overtaking age old methods, in every field on the planet, man still seems helpless. Especially when it comes to tackling various health issues, of which the remedies are still in the germination stage. Certain disabilities can cripple man’s life. More so his agility and his progress in life could be hindered.
In such a scenario, most people lose heart and become recluses. They submit themselves and their future to their fate. But yet there are some, who rise above all and build their future, step by step. It is this steel-grit and determination of young Karan Shah, which led the doe-eyed ‘Angel’, a pretty female Labrador pup into his arms. Karan physically has a spinal cord disorder, Spinal muscular Atrophy (SMA),  by birth, due to which he is wheel-chair bound. But as we say, God has sent each one of us with a mission. Some of us leave for our heavenly abode without even acknowledging our true worth and our hidden talents. It is said that a strong will-power gets you closer to your future goal. This is exactly what has happened with Karan. He got his Angel as a gift from a close and dear family friend quite unexpectedly.
Karan’s father Mr Sunil Shah who is also a great dog lover, along with Karan were thrilled, at having brought home this bundle of joy. For his mother, Mrs Pratima Shah, Angel, is like a daughter, whom she dotes on. The dear girl had won their hearts at first sight and now she is an important part of their lives. Karan has disciplined her, has worked out a fixed schedule for her walks, play time, training and meals. His mom prepares nutritious vegetarian meals for Angel in the kitchen, which ensures that she doesn’t miss out on any nutrient. Commercially available dog food is given, once a day too. But for her training she is given treats or dog biscuits or whatever Karan finds most suitable, so that Angel’s health isn’t affected in any way. He has not only taught her the basic commands like sit, stay, jump, up, shake hands ,recall, fetch articles, but also  the advanced training has been given to her of switching on and off lights and fans, fetching his cell when it rings etc. He takes her for walks and walks her by tying her leash to his chair, but she walks very obediently beside him, as a companion and as a friend. He has trained her, never to tug at the leash and to see her follow his rules, sure is commendable.
In their lives buzzing around Angel, like any good parents would, they searched for a good trainer for her and chanced upon a name, well known in dog training, Mrs Shirin Merchant. Mrs Merchant guided them in many ways. In fact both father-son duo did her course for trainers. They averred that Angel should be an assistant to Karan. So finally the real training began, of Angel, by Karan, guided by Mrs Shirin Merchant, for Assistive dog training. She was a very good student, who picked up commands very quickly and did not fail her master and teacher in any way. This is what Mrs Shirin Merchant has to say about her students, Karan and Angel, “Angel and Karan are a team made in heaven. Angel is one of the fastest dogs, I’ve taught and is very special. Even though she’s young she has a certain maturity about her and is a wonderful partner to Karan”. Karan has not only got the satisfaction of training Angel, but also has trained few other dogs too. Basically since he has successfully completed ‘The canine teaching and training course’ and ‘Canine aggression course’ at Mrs Shirin Merchant’s training school, he is eligible and experienced enough to train pet dogs now.
Karan has also started his own page on Facebook, named as ‘Pawsitive future’ in which his positive approach can be distinctly seen. All those who know him, can see, thanks to his ‘moving ahead and calm’ attitude towards life that he is already moving towards a great future. He is now a Canine trainer and Consultant. He can train for therapy for Parkinson and Autism cases. As of now he has taken up training for bonding kids and dogs for making them comfortable with each other. If 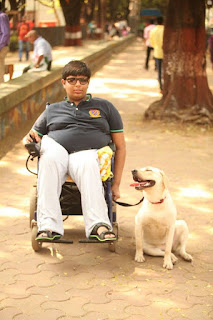 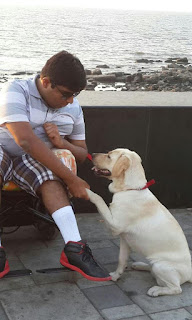 anyone needs guidance regarding their dogs, he can be contacted by email- His id is pawsitivefuture@hotmail.com.
Angel has filled his world with positivity and love. So somehow, he can’t, but help giving a large part of that credit to his pretty, playful, doe-eyed Angel, who will loyally, silently, assist him forever.
Supriya Bhonsle

Posted by Supriya Bhonsle at 20:41